From 1997-1999 I played trombone in the University of Alabama Million Dollar Band. I’ve noticed from my own behavior that there’s basically one thing you need to know in order to identify a band geek at the gym–or in any public place, for that matter.

It’s not “are they moving in time with the music?” because almost everyone does that. There’s just a little bit more.

Look for how they’re moving for anything that involves counting. If they are compelled as if by some mystical force to hit the odd beats (1 and 3) with their left foot, you’ve probably identified someone who has had drilled into him or her marching patterns where the left foot hits on 1, 3, 5, and 7 and the right foot hits on 2, 4, 6, and 8.

Does this thing involve counting by fours? Easy-peasy. Can I lead with my left foot for the first four counts? Simple.

Here’s one of my favorite XKCD strips. 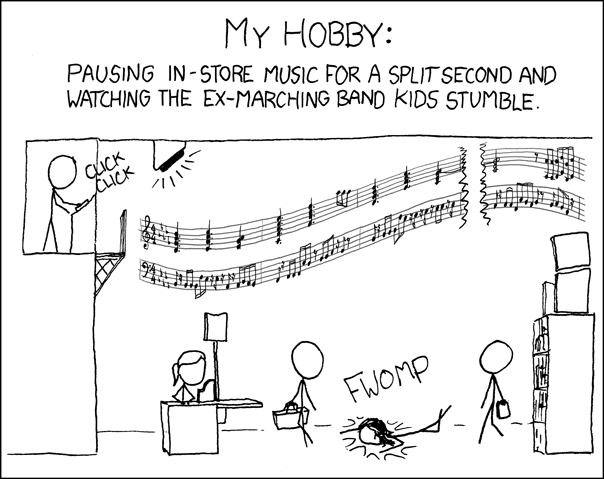 You can identify them ahead-of-time –they lead with their left foot when the music starts.