I Watch Things: “Ralph Breaks the Internet” and the Worst Christmas Movie Ever 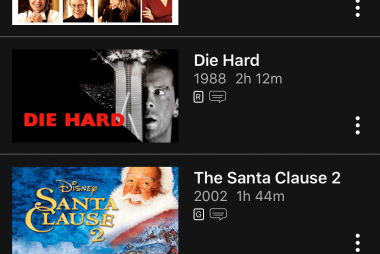 A search for “holiday” on Amazon Prime settles an important question.

Wonder. It feels like a paint-by-number after-school special in which people learn a Very Special Lesson about how to treat people who are different, but I think there’s more to it than that. It’s the story of Auggie Pullman’s adjustment to life in a regular school with “facial differences” that, after multiple surgeries, still leave him looking unlike the other kids. Predictable, yes, but it’s a great movie to watch with the kids because you can discuss with them step-by-step why what each character does is right, wrong, or ambiguous.

Ralph Breaks the Internet. It’s still in the theaters, but I went ahead and preordered this one. We saw it on opening day, we’ll probably see it again when it’s in the $1.50 theater, and I suspect it will become a family favorite just like the original. It’s first-rate family entertainment: it’s very cleverly done, and I can’t say much more without giving away the good parts. To tide you over until it’s released or until you can see it in theaters, here’s a cool video about the original in which the Foundation for Economic Education explains that Ralph is not the bad guy.